Any Excuse: The War of Jenkins' Ear

Today in history, a man lost an ear which started a war.


In April of 1731, British Captain Robert Jenkins loses an ear to a band of Spanish brigands, starting a war between Britain and Spain: The War of Jenkins’ Ear. Asked to appear in Parliament to recount his tale in 1738, he reputedly displayed his ear during his testimony. Yuck: he kept that ear for seven years? In what? A hanky, a box, his coat pocket?


War of Jenkins’ Ear, war between Great Britain and Spain that began in October 1739 and eventually merged into the War of the Austrian Succession (1740–48). It did not start over an ear, as detailed by Historian Kennedy Hickman:

As part of the Treaty of Utrecht which ended the War of the Spanish Succession, Britain received a thirty-year trade agreement (an asiento) from Spain which permitted British merchants to trade up to 500 tons of goods per year in the Spanish colonies as well as sell an unlimited number of slaves. Though the asiento was in effect, its operation was often hindered by military conflicts between the two nations. In the wake of the Anglo-Spanish War (1727-1729), Britain granted Spain the right to stop British ships to ensure that the terms of the agreement were being respected.

Believing that the British were taking advantage of the agreement and smuggling, Spanish authorities began boarding and seizing British ships, as well as holding and torturing their crews. This led to an increase in tensions and an up swell of anti-Spanish sentiment in Britain. Though wishing to avoid war, First Minister Sir Robert Walpole was pressured into sending additional troops to Gibraltar and dispatching a fleet to the West Indies.In return, King Philip V suspended the asiento and confiscated British ships in Spanish ports.

Wishing to avoid a military conflict, both sides met at Pardo to seek a diplomatic resolution. The resulting Convention of Pardo, which was signed in early 1739, proved unpopular in Britain and the public clamored for war. By October, both sides had repeatedly violated the convention's terms. Though reluctant, Walpole officially declared war on October 23, 1739.

So - in reality - the ear issue really was an excuse or incident that added wax to the drum...ahahahah. No.

Public opinion had already been aroused by other Spanish outrages on British ships, and the Jenkins episode was swiftly exploited by members of Parliament who were in opposition to the government of Robert Walpole. By declaring war, Walpole hoped to appease the public and the opposition.

But here's the shorter version of events. 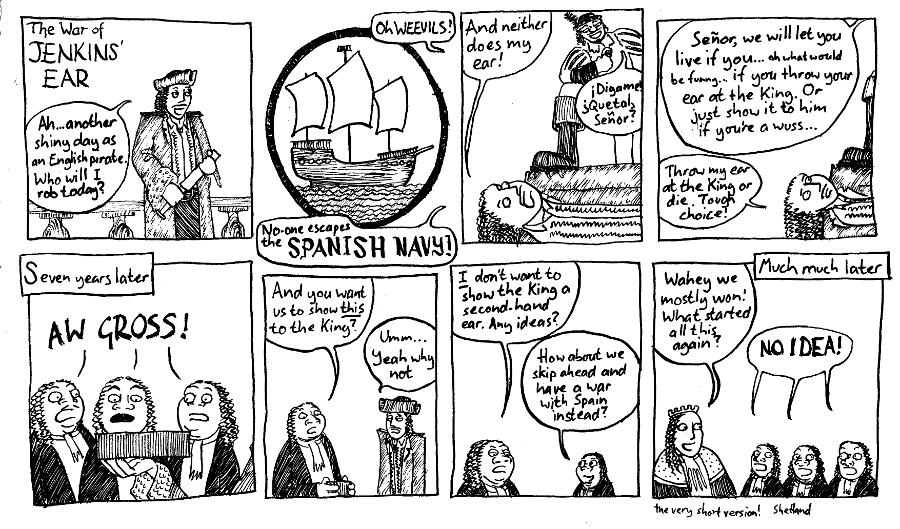